A famous face deserves a home base. Sammy the Bearkat, the beloved mascot of Sam Houston State University in Huntsville, Texas is a popular attraction at many athletic events, and appears frequently at various campus and community functions. After a major renovation and expansion project at the Sam Houston State University Lowman Student Center, the Department of Student Activities rewarded Sammy with a new space to store his many costumes and equipment and a private place for changing and event preparation.

More Than Your Average Mascot

Sammy Bearkat, a character that today’s SHSU students know quite well, did not appear on campus until 1959. His first incarnation—a paper maché head wearing a sailor’s hat—was the result of a design by assistant dean of women Dorothy Meek, art instructor Mabel Taylor, and various art students and cheerleaders.

The cartoon-like image that is known and loved today debuted in 1997, brought to life from the imagination of student and cartoonist James Pharaon. The character was designed to appear both tough and friendly, with certain features resembling a cat—especially the eyes and tail—and other traits resembling a bear. One last small makeover around 1999 gave Sammy smaller, lighter hands and head so he would be able to perform more athletic stunts at school events.

Sammy the Bearkat maintains a full schedule on campus, in the community, on game day, and around the region appearing at events such as SHSU athletic events, birthday parties, fundraisers, campus visits, student events, conferences, and grand openings just to name a few. Sammy receives requests for appearances at all campus and community events and from all over the state of Texas.

To support Sammy's busy schedule and many wardrobe changes, the Department of Student Activities upgraded Sammy's prior arrangements in conjunction with the remodel and expansion of the Lowman Student Center on campus. Before construction, Sammy made use of an old public restroom/changing area down a back hallway of the old suite for a quick change without adequate privacy or storage capabilities.

Sammy the Bearkat has several different costumes made for each type of appearance including: football, basketball, baseball, Halloween, scrubs, an assorted set of t-shirts he is asked to wear, and a white and orange tuxedo.

No project is too large or small at The Athletic Edge. Teams and organizations can choose a roomful of lockers, or just a single one just as Sam Houston State University did. The Bearkats selected a custom oak wood locker with black stain as Sammy the Bearkat's new home base complete with these features:

A personal note from Sammy:

"I am very thankful for this locker, and I am so excited to dirty it up with all my fun
throughout the year." 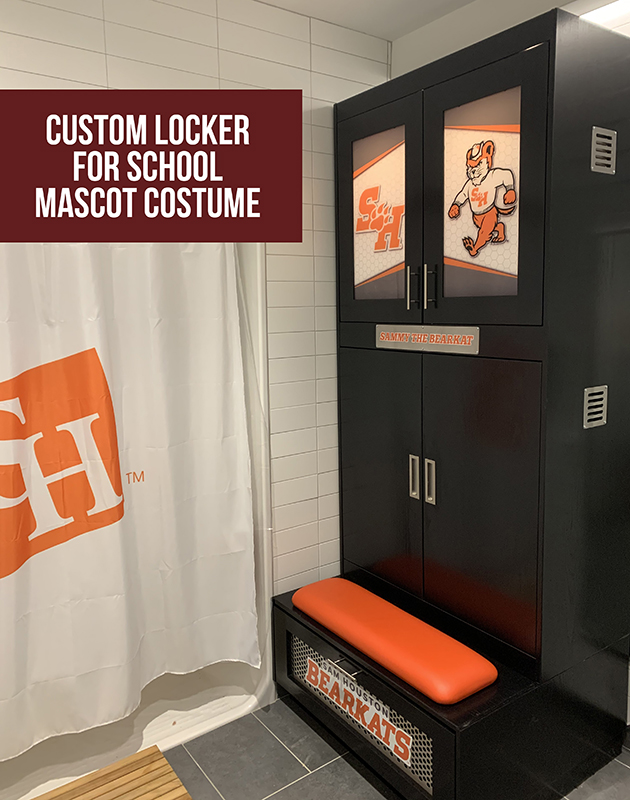