The Athletic EdgeTM Joins Sidelines During Ducks Vs. Spartans Game

The Athletic Edge Joins Sidelines During Ducks Vs. Spartans Game

Eugene, OR, September 5, 2014 — When the Oregon Ducks take the field against the Michigan State Spartans this Saturday at Autzen Stadium, the top-ranked teams will face off on the sidelines too: The Ducks will debut a brand-new product by The Athletic Edge TM, one of the nation’s largest manufacturers of beautifully designed and rugged products for athletic trainers, physical therapists and other health care providers. 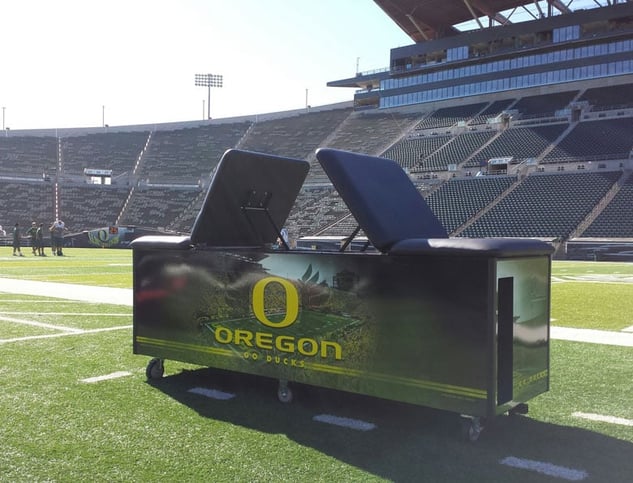 The Oregon Ducks commissioned an eight-foot-long custom version of The Athletic Edge’s new Sideline Cart. Complete with lockable storage, the mobile cart-on-wheels will house medical supplies such as backboards, walking boots and medical kits, bringing supplies and a workstation right to the sideline. Thanks to its cushioned top, it also serves as combination taping station/evaluation table, able to treat one supine or up to four seated players at a time.

Michigan State also plans to debut its own Athletic Edge products later this year—two custom-branded Sideline tables. Although lightweight (only 45 lbs.) and portable, the heavy-duty aluminum tables are designed to support a 600 lb. weight capacity—ideal for the girth and height of a team’s defensive players. These weather-resistant tables can serve as evaluation or triage tables.

Both products will also show off their teams’ edge thanks to The Athletic Edge’s TM custom branding options, including team logo colors and vinyl graphics. “We wish both the Oregon Ducks and the Michigan State Spartans the best as they face each other during Saturday’s game,” said Jim Engels, CEO of The Athletic Edge TM.  “We are honored that both of these top-ranked teams are choosing Athletic Edge products to be a part of their seasons. These products will provide useful and necessary sideline support but will also serve as an attractive showpiece that generates team pride and spirit in their athletes and boosters.”

The Athletic Edge debuted the Sideline Cart and the Sideline Table at this past summer’s National Athletic Trainers’ Association Clinical Symposia & AT Expo, where representatives from the University of Oregon and Miotech Sports Medicine Supplies met with The Athletic Edge and began working with them to design their custom products.

The Oregon Ducks vs. Michigan State Spartans game will be televised nationally starting at 6:30 p.m. on Saturday on FOX.

About The Athletic EdgeTM

Part of Pivotal Health Solutions, The Athletic EdgeTM partners with athletic programs nationwide to plan and build locker rooms, training areas and rehabilitation settings designed to make a statement, inspiring athletes, alumni, donors and visitors. Our unique standard multi-configuration modular designs fit any space, are durable and professional, and may also be custom-built and custom-branded. For more, visit teamedgeathletics.com.

To locate a dealer in your area or to order the Sideline Cart or Sideline Table, please visit our website TeamEdgeAthlettics.com or contact our customer service team at (800) 743-7738, or via email at info@pivotalhealthsolutions.com.