Why do student athletes choose a college? Academics make a difference for sure, but according to a recent survey, a surprising number of college recruits point to a team’s facilities as a major attractor. A custom-branded locker and training facility that speaks to the hearts and minds of these young athletes can be the deciding factor for your school or program. Writer Alicia Jessop with Forbes.com explains. 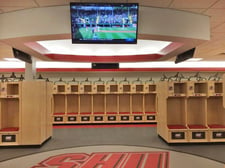 College football recruiting has become a big business, with the likes of ESPN nationally televising the campus selections of young men. Top-tier football programs invest hundreds of thousands of dollars annually to lure the highest-rated recruits to their programs. What factors attract football recruits to the colleges and programs they ultimately choose?

Major football programs and their associated athletic departments nationwide are arguably picking up on this trend. At least 24 BCS football programs are engaged in or recently completed construction projects aimed at benefiting their football programs. These include locker room upgrades, like those taking place at Syracuse to the tune of $5 million.

In engaging in these projects, football programs and athletic departments are not only seeking to build the most impressive facilities, but they are working to tell stories about their programs. These stories are aimed partially at captivating the minds and impressions of the young men they are working to recruit to their programs. One way that football programs and athletic departments tell these stories is by building branding opportunities into finished construction projects.

The men at the helm of recruiting young men to play football are similarly aware of the significant role branding and facilities play in a recruit’s decision. When James Franklin took over as Vanderbilt’s head football coach, he inherited a team that had been to four bowl games in 122 years and one winning season in the last 28 years. Given these records, prior to Franklin’s arrival, Vanderbilt’s athletics department was more prone to spend money on upgrades to its basketball and baseball teams’ facilities. Since Franklin’s arrival, however, Vanderbilt has installed new field turf, lights and a jumbo-tron to its football stadium, while also renovating its football meeting rooms and locker room.

“Although [recruits and their families] know that education is the most important thing, they get caught up in other things. It might be the size of the stadium, branding or people selling the NFL more than education. You have to remember that you’re dealing with 17- to 19-year-olds that can be easily influenced. At Vanderbilt, our message is that we have four characteristics: an opportunity to get a world-class education, an opportunity to play in the greatest football conference in America, living in Nashville and playing time. What’s important in the branding throughout your building is that there is consistency in your branding and in your messaging, so what you’re saying and what you’re selling is being reinforced throughout the graphics in the building,” Franklin explained.

As athletic departments nationwide continue to commit themselves to building costly athletic facilities, this remains certain: Recruits will continue to be attracted to programs with the greatest facilities. 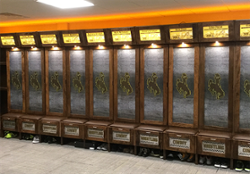