A "Laser" Focus on Athletic Injuries

It’s a new age in pain relief and healing. More and more athletic trainers in major league sports teams are using cold laser therapy, both to treat injuries and as a warm-up before play. These devices are mobile and easy to use, and research has demonstrated both faster healing and improved outcomes. The American Chiropractic Association takes a closer look at low-level laser therapy and its role in sports injuries. 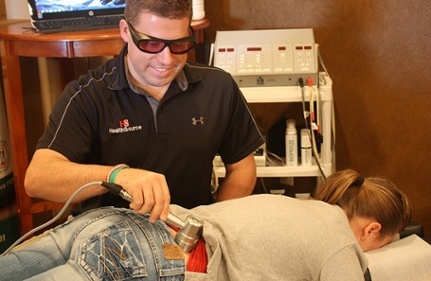 Light in its various forms has been used for healing from the time of the ancient Egyptian and Greek civilizations. The negative effects of the absence of light on the human body are well documented (e.g., seasonal affective disorder, also called SAD; lack of vitamin D production; rickets, etc.). Therapy using LASER, an acronym for “light amplification by stimulated emission of radiation,” is based on the beneficial use of light for healing.

Recent advances in laser therapy devices and more research into the appropriate dosages have dramatically improved the results of this therapy.

Low-Level Laser Therapy (LLLT) is the use of red and near-infrared monochromatic light to enhance the body’s natural healing processes. The light source is placed in contact with the skin, allowing the light energy (photons) to penetrate tissue where it interacts to increase circulation and help restore normal cellular function. LLLT does not break the skin as do surgical lasers.

The Food and Drug Administration (FDA) approved LLLT1 (with this approval came a new classification of therapeutic devices, referred to as NHN), known by many other names, such as cold laser, non-thermal laser, soft laser, biostimulation laser, low-intensity laser and low-power laser therapy, as an effective method for temporary pain relief. The LLLT is the type of laser most commonly used in your doctor of chiropractic’s office.

The low-energy laser pulses can be adjusted to penetrate more deeply and more aggressively into the skin tissue, depending on the condition and goals of treatment. The light energy, which can be delivered by either a large device that emits multiple laser panels at once or a hand-held device for smaller targeted areas, will pass through the skin layers to reach the cells and tissue causing the pain and inflammation. The laser device is held against the skin over the area being treated. The light energy is absorbed and converted to biochemical energy, which stimulates the cells. That activates the natural healing process of the cells, which reduces pain, increases blood flow, and stimulates repair of the tissue.2

Pain Relief
Before recommending LLLT treatment, a provider must diagnose the condition to confirm that the issue is pain from a neuromusculoskeletal condition caused by aging, injury, or genetics and that there is no disqualifying condition or contraindication for laser use. For example, if the back has visible lesions on the skin, it must first be confirmed that they are not cancerous before the patient can undergo laser therapy. Pregnant women also are not good candidates for LLLT; the effects on unborn children are unknown. Although the FDA says cold laser treatment is safe and has no known side effects (the LLLT involves low-energy beams and very low absorption rates that can’t harm the skin tissue because of complete absence of heat), the depth of tissue penetration indicates that it could affect certain conditions, such as cancer, pregnancy and thyroid issues. Also, lasers should not be used near the eyes.

LLLT has various protocols for different conditions. The treatment provider must know the exact location, cause, degree and frequency of back pain in order to select the appropriate protocol for optimum performance. Understanding the exact condition causing the back pain also can guide how many treatments will be needed for effectiveness and how frequent the treatment sessions should be. LLLT is used to help heal wounds3 and to treat many types of musculoskeletal injuries4 and disorders. As research continues, the use of lasers is expanding. LLLT is used to treat both acute and chronic pain.

Targeting Inflammation
For inflammation, laser therapy causes the smaller arteries and lymph vessels of the body to increase in size, which is called vasodilation. Vasodilation allows inflammation, swelling and edema to be cleared away from injury sites more effectively. Vasodilation in lymph nodes promotes lymphatic drainage, which also aids in the healing process. Bruises are often resolved faster due to this effect. 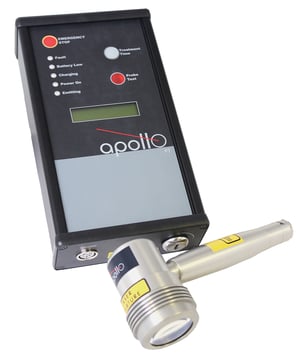 The benefits of LLLT appear to be cumulative—it may take several treatments for the results to become evident. Spine-Health.com reports that it can take anywhere from eight to 30 sessions for the treatment to be fully effective, and some patients find it necessary to undergo treatment two to four times per week. The total number of treatments needed depends on the condition being treated, the severity of the condition, and each patient’s individual response.

Over-treatment isn’t possible, and an added benefit is that there is no recovery time so patients simply can read or relax during the typical half-hour treatment.

Sports Injuries
Laser therapy has been adopted as an essential pain management tool by athletic trainers in most major league sports franchises in the United States, as well as by many Olympic teams. Trainers claim that elite athletes make comebacks faster after being injured when LLLT is part of the treatment plan.5 Major league pitchers, for example, use lasers as part of a normal warm-up routine, and many athletes use them as part of rehabilitation.

Doctors of chiropractic also use lasers to treat the weekend athlete with common sports injuries such as plantar fasciitis, hamstring pulls, and various muscular strains. The laser can help any level of athlete heal faster and with a more positive outcome. 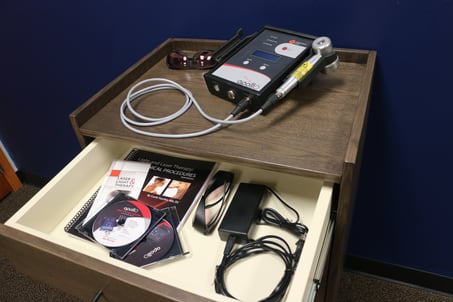